Gospels According to Saint Francis

How Are You Following Christ?

The third text in Bonaventure’s account, Matthew 16:24, tells us, “If you have a mind to come my way, renounce yourself, and take up your cross and follow me.” In this text, the really important words are the last ones: “Follow me.”

If we understand that and can make it real in our lives, the rest of these things may follow. But how are we to follow in the footsteps of Christ? What does this mean practically and realistically? What does it mean personally? How literally do we take those words? And if we don’t take them literally, what do those words mean to say?

Following in the footsteps of Christ doesn’t mean that we should all go over to the Holy Land, try to find the footsteps of Jesus, and walk in them. It means, rather, that our lives must become identified with the life of Christ.

We should approach life the way he approached life. If it means carrying the cross—whatever that implies in our modern age and in our own personal circumstances—that is what we must do. We might well ask ourselves, why was Jesus put to death? He was put to death because he was faithful to his Father. He did what was asked of him by God the Father; nobody wanted to hear about that, especially the people in power, both civil and religious. None of them wanted to hear what Jesus had to say.

Today we’re tempted to do the same; we don’t want to hear about what my Father wants us to do because we’re afraid of the consequences. What might it do to us? How would we have to change?

But Jesus decided, “I will do what God wants, no matter what.” In challenging the people of his day, the civil and the religious authorities, he gradually came to realize he would even lose his life because of fidelity to his Father.

Look at your life. Where are you really being faithful? How can you be more faithful? It’s easy to be faithful in some things. For most of us, it’s just some rather small things that demand fidelity; still, we give up on it.

For example, look at the times when we’ll get in a little bit of trouble unless we tell a lie. This lie probably isn’t serious, and we should have a few faults anyway, so we tell a lie and that solves a lot of problems for us. Yet, maybe that’s exactly when we’re called to be faithful.

We won’t end up being put on a cross or sent to the guillotine or something drastic like that, but telling the truth will cause us some trouble—and we’d rather avoid trouble. Christ says, “If you want to come after me, really follow in my footsteps, be faithful as I was faithful to the Father.” That means all those little compromises that are so easy for us to make must go: a lie here, a little cheating there, a little bit of backbiting over there.

All these things can make life easier for us, but Christ is calling us to be faithful in all of these things, to really follow in his footsteps and be faithful to his Father.

Whether it’s big things or small things, Jesus makes a very strong statement here: if anyone wishes to follow after him, that person needs to deny his very self. Does that mean we shouldn’t be selfish; is that what it literally means?

Surely, it means at least that: to get over that selfishness that wants to keep protecting the self, to stop making compromises, to stop allowing ourselves to be indifferent. But it means even more than that, because Jesus doesn’t say, “Deny your selfishness”; he says to deny yourself. Now, we know that God made us and that we are a treasured part of creation; God doesn’t want us to destroy ourselves.

But what is it that’s being asked of us when we are told to deny ourselves? Does this mean we should see that God has to be most important in our lives, that we must be secondary to God? Maybe that’s a bad way of putting it, too. God is all important; God is everything. And whenever we compromise, even in the smallest way, by putting ourselves before God and before others, those are the times when we do not deny ourselves.

And so, while we must give up our attachment to possessions and give to the poor, we must also give up our very selves and realize that God is first; Jesus is first. We are called to deny ourselves, to take up whatever cross there is in our lives, whatever kind of pain comes into our lives, and really begin to follow in Christ’s footsteps. Francis sums this up well in his simple little prayer: “My God and my all.” 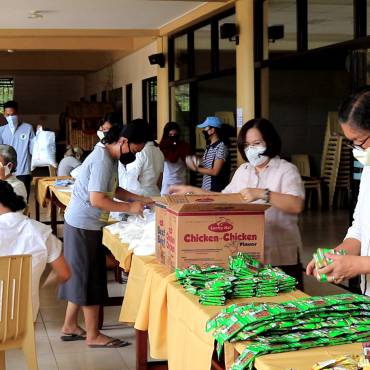 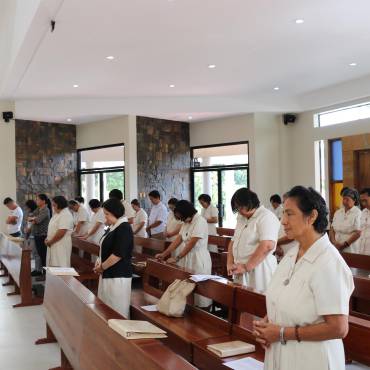